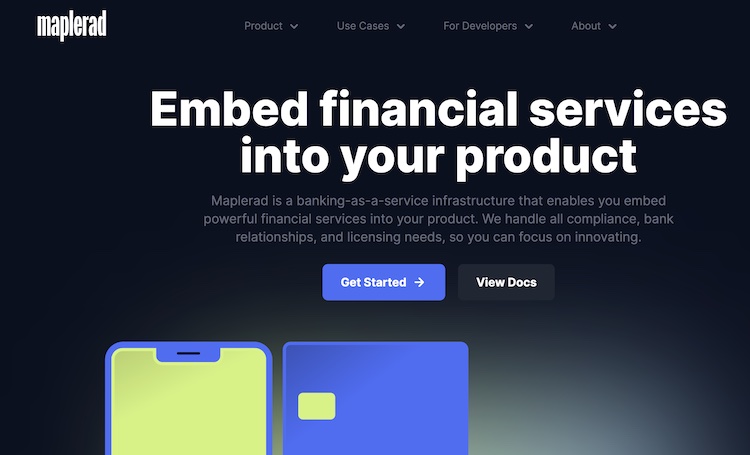 Founded by Miracle Anyanwu and Obinna Chukwujioke , Marplerad is a banking-as-a-service infrastructure that enables entities to embed powerful financial services into their products. The US-based handles all compliance, bank relationships, and licensing requirements.

The promoters of Maplerad stated that the company did not start out as a BaaS company. They actually started out in 2020 with a product called Wirepay, an app to help users make international payments by offering cross-border payment solutions in fiat and cryptocurrency. Wirepay now provides all-in-one finance product that enables users to receive, hold, and make payments in multiple currencies, create virtual and physical cards, and pay bills.

They finally arranged to beta-launch Maplerad, the infra product that allows companies to embed powerful financial features like accounts, payments, FX, and cards into their products, in August 2022.

“From day one, when we built Wirepay for our consumers, we knew the end move would be infrastructural even though we didn’t start the business infrastructure first. For anyone to build anything finance-related, they have a whole lot of banking stack that they have to start with and even before integrating features, they have to go past many hurdles,” said the chief executive. “One of them is banking relationships and compliance. The other is licencing. So Maplerad is solving financial infrastructure problems for these businesses in Africa. We handle that whole stack and provide the best-in-class APIs to use that can make you launch a financial product within five minutes. So instead of a company spending 8 months and a couple of million dollars to start building a fintech product, you can integrate with our APIs and go live.”

Maplerad, coming out of stealth, raised the seed round at a $30 million valuation. While in stealth, the company claims, it processed millions of dollars monthly for over 100 businesses acquired onto its platform, including startups such as Pastel, Spleet, Bridgecard, Onboardly, Vella, Crowdforce, Dojah, GetEquity, and a few banks. It plans to use the investment to acquire more customers, get additional licences, build its team and solidify its presence across Africa.